Posted by inger-sannes.se on October 15, 2015 in Recent Work, social media | Comments Off on Oslo Innovation Award 2015 to GELATO GROUP 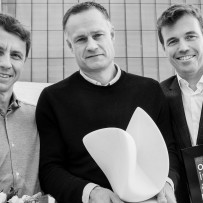 Snøhetta, the architect of Oslo Opera House, got the award 2014

I am proud to be a part of this successful initiative from Oslo Business Region by making the award in white Statuario marble every year since 2008.